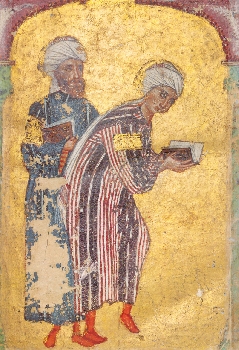 The history of the striped fashion “trend” is a long and complex one. A cultural journey of cloth and ideologies from Middle East to West, from Muslim traditions to the realms of fashion bibles today.

Much has been said and written about striped textiles. One of the most enjoyable books on the subject is The Devil’s Cloth   by Michel Pastoureau. First published in 1991 (republished since) and translated into several languages. The author explores various aspects of striped clothing from a sociological and semantic perspective.

Striped textiles became part of European fashion via the arabic conquest of Spain in the 8th Century.  In the Middle East (and throughout  muslim-conquered lands) striped clothing was fashionable for centuries and still is where traditional dress is still worn. Its origins going back to the dawn of the art of weaving. In the 13th Century image above we see a young arabic gentleman (medical student or young doctor) wearing a long-sleeved striped tunic. In the 10th Century image bellow we see a rider from arab-dominated Spain, also wearing striped textiles both for his clothing and accessories. This illuminated manuscript was actually painted by a woman but that’s another story…

As always history gets exciting when we have some material artefact as testimonial evidence:

The garment above is part of a three-piece set found on the remains of the Infanta Maria, daughter of Ferdinand III of Castilla y Leon. She died in 1235 and considering her status she would have been dressed in new clothes for her burial. This item of dress may seem like nothing, even macabre, until we contextualize it by saying that this kind of fabric/fashion simply was not around elsewhere in Europe at this point in time.

In the middle ages fashions traveled surprisingly fast across Europe. This one though came up against great resistance. Its  association with muslim culture/religion was dangerous, a threat to  Christian European tradition. So stripes became associated with the devil or the reppresentations of – but for that story you can go to Pastoureau’s book…